Get the latest updates and news from Trackier

Apple recently announced its plans of unveiling iOS 16 and with it the SKAdNetwork 4.0 in September. This has thrown the attribution industry into a frenzy and much has been said about how it will impact the whole mobile marketing ecosystem.

We at Trackier have been envisioning our own future and looking toward developing next-generation solutions that focus less on individual data points as we move toward optimizing for aggregated data.

In this article, we will unearth how these mostly privacy-focused changes will impact app campaigns and advertisers. We will also discuss what Trackier as an attribution solution is doing to curb anything that may be taxing to our customers. 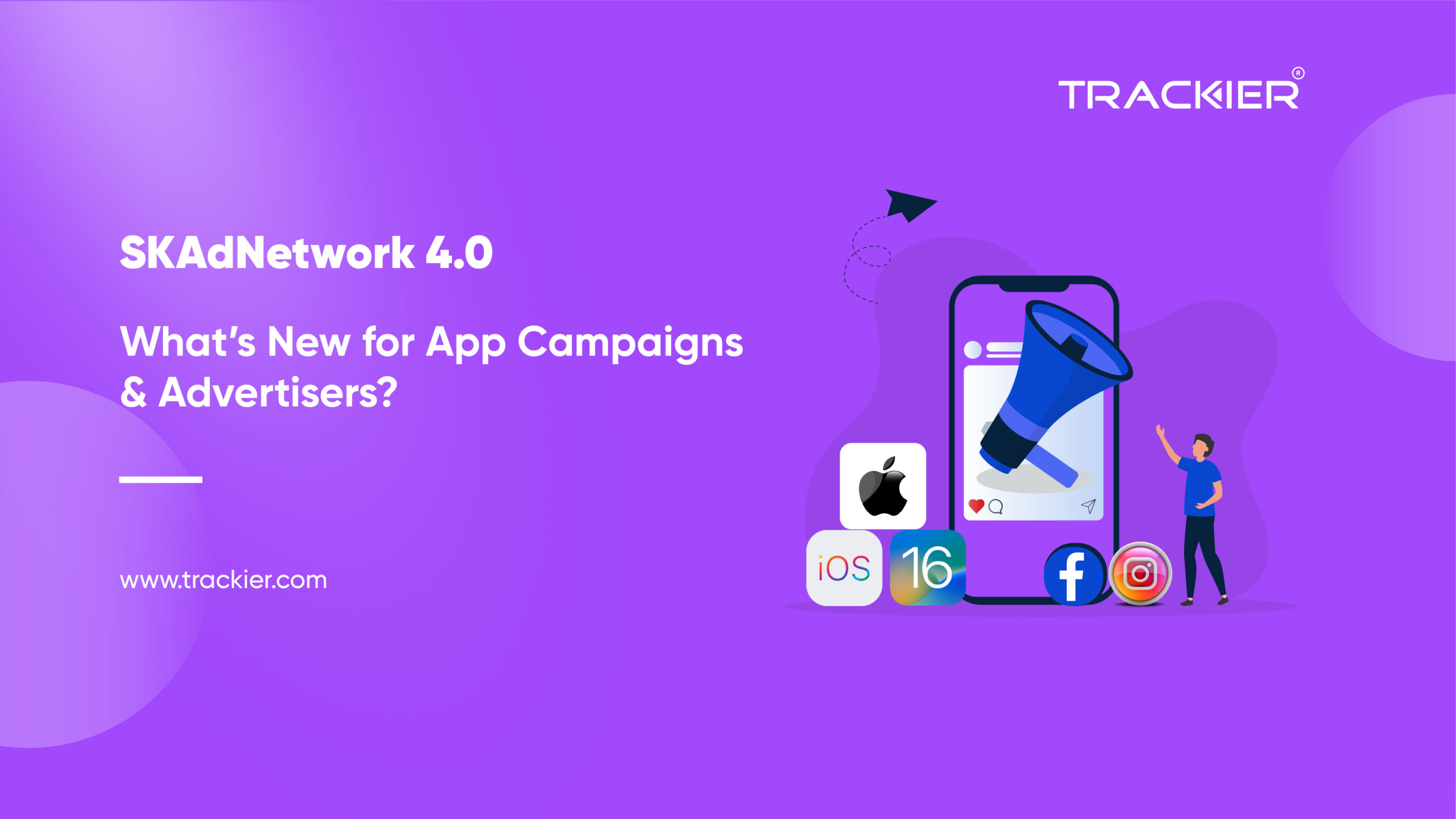 Before we talk about the changes brought along by SKAdNetwork 4.0, it’s pertinent to understand what exactly SKAdNetwork is. In the simplest of words, the SKAdNetwork framework helps with direct mobile app install attribution.

So, if you are someone who has an app, SKAdNetwork would allow you to measure different ad activities like impressions, clicks, app installs, etc. What then it has to do with privacy, you say? Well, while it provides advertisers with information about their ads’ performance, it does not disclose user- and device-specific information.

Now you must be wondering, how SKAdNetwork works? Following are the four main components of SKAdNetwork:

Through SKAdNetwork, advertisers and marketers are able to effectively track engagement data, mainly ad views and StoreKit renders. They are then able to understand the performance of different ads and use this information to optimize their ads.

Now, let’s understand the process through which SKAdNetwork operates. Let’s assume that you are the person at the viewing end of the ad. As soon as the ad is displayed on the publisher app, SKAdNetwork receives a notification that the process has started.

This would be captured as an ad view. If while watching the ad, you engage with it, the publisher app will render the target app StoreKit. Any action that you take after, like downloading, installing, or opening the target app, will be captured by the framework. SKAdNetwork will attribute any install to the ad network if it is done within 30 days after clicking on the ad. Finally, the mobile device will transfer an install postback to the network along with a copy for the advertiser to view.

Use cases of SKAdNetwork for advertisers

These are the data points that can be collected by Advertisers using SKAdNetwork:

However, you might need a third-party tool analytics tool like Trackier or any other MMP to make use of these data points. Why? Because you will need to meet the following requirements to utilize this data to improve advertising campaigns:

Features of SKAdNetwork 4.0 and their effect on advertisers

The new and improved SKAdNetwork 4.0 is not just great for consumers but has a lot of improvements for app marketers as well. There are a few drawbacks, as well. We will share both sides of the coin with you.

Here are the new SKAdNetwork 4.0 features:

Up to three postbacks

In the current, soon-to-be previous version of SKAdNetwork, advertisers were only allowed to receive a single postback. They have increased the window of postbacks and this new update stands to up that number to three. Now the first one has a window of 0-2 days, the second, 3-7, and the last, 8-35.

This stands to benefit advertisers as they can now optimize more effectively for conversions and measure earlier events, including installs.

How is it different than the previous version? The single-postback model allowed for install and post-install conversions to appear in one postback. This meant delayed notification of installs. It was a pain for the advertisers as they only received install notifications after the final conversion within the time window.

With the update, advertisers will be able to optimize ad campaigns faster. The performance insights, specifically the ability to learn about conversions as they are happening will be a boon for advertisers.

The previous SKAdNetwork only supported up to two campaign IDs. Apple has upped this number to a maximum of four. This campaign ID will now be called source ID and it will bring the ability to support up to 10,000 values for app campaigns, creative, and other elements.

These elements will preserve the privacy of the end user while allowing for the important data points that advertisers need to support their campaigns. The data points can include location, campaign, ad placement, etc.

So, although the advertisers will have many potential IDs to use in campaigns, they will have to do so while adhering to Apple’s new very strict privacy guidelines.

However, there is still something lacking. Even this version will only support clicks and no support will be provided for views. The clicks will be registered by the framework from embedded cross-site iframes along with first-party sites.

Apple is also planning to add features to their SKAdNetwork 4.0 update that will make testing easier and better. With this update, advertisers will be able to validate ad impression implementation and test SKAdNetwork postback.

The tech industry is hellbent on phasing-out third-party cookies which is making it a challenge to mine information about customers. These privacy changes are the beginnings of a paradigm shift that will continue to drive advertisers and distributors to rethink data collection and usage practices.

All these changes are underlining the importance of zero-party and first-party data. In the coming years, as much as 50% of open data will become unreliable and no longer useful as a success metric. It will be time to focus on reliable first- and zero-party data given willingly by consumers.

Here are a few challenges that I think the MMP industry will face in the near future due to SKAN 4.0:

Advertisers have to be ready for stricter privacy regulations as these are only going to increase in the future. Rather than seeing it as a handicap, we should find opportunities on how we can better attribute, measure, and optimize campaigns.

To make the best of your advertising upon the release of SKAdNetwork 4.0, Trackier advises advertisers to:

If you are working in the mobile marketing ecosystem, do not despair from the changes being brought to privacy regulations. Instead, as an end-user yourself, you should rejoice! As an advertiser you are bound to get more actionable insights and fear not you will still be able to run successful campaigns.

You can always count on Trackier to help you fully integrate SKAdNetwork 4.0 and supercharge your advertising efforts.

More Blogs From Us

Tap every user attribution in real-time with Trackier